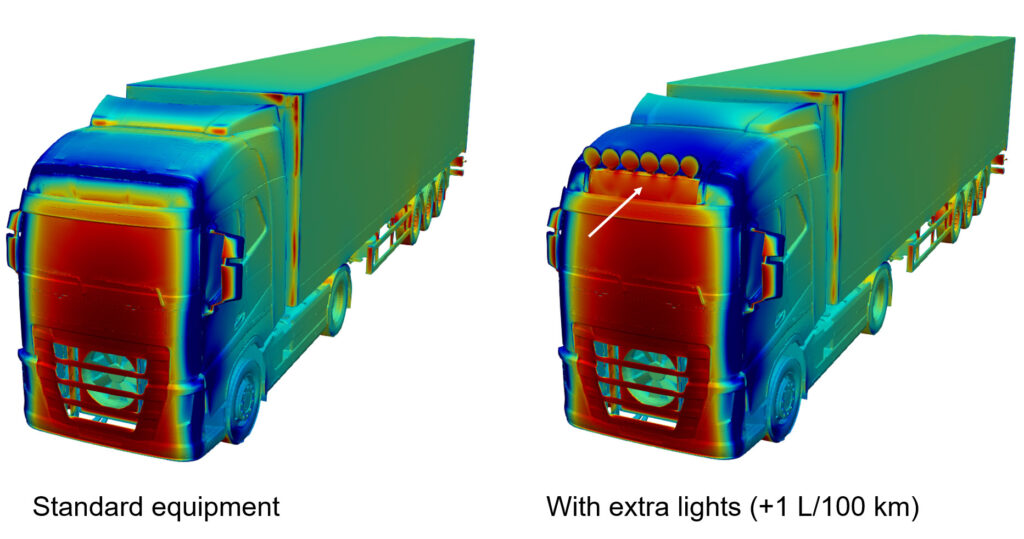 The simulation shows how extra lights increase the pressure in the critical area where they are mounted. This leads to reduced forward suction at the roof transition area, which results in increased fuel consumption

Even though European trucks might seem fairly brick-shaped, the OEMs put vast resources towards streamlining the vehicles as much as possible. The rules regarding maximum length however necessitates a design that uses a rather flat front – since profitability increases with a longer cargo area. That is why a longer, more aerodynamic, nose is not currently used, since a longer tractor would result in a shorter load carrier to stay within the maximum allowed vehicle length.

As the truck travels along, air molecules will stagnate against the front of it which builds up a high air pressure at the surface. This pressure pushes the truck against the direction of travel and is the biggest contributor to total air drag. This effect is however counteracted somewhat through a powerful low pressure that develops at the front corners of the truck – which sucks the vehicle forward. To achieve as low aerodynamic drag as possible, a lot of development resource is therefore usually allocated to trying to maximize this forward suction.

What most people however don’t think about is how significant the negative impact from common add-ons is on the truck’s aerodynamic performance. Roof-mounted extra lights are usually mounted in a way which severely impacts the forward suction that normally is created at the transition from the truck’s front to its roof. This leads to a significant increase in drag, and thereby fuel consumption, that is a lot bigger than the direct contribution from the lights themselves.

To illustrate this effect, Rumblestrip has simulated the aerodynamics of a European-style semi-trailer truck. Air drag is compared between a standard “clean” truck and one with an extra lights ramp consisting of six lamps which are mounted on a standard roof rail. The air is coming towards the truck slightly from the left at an angle of five degrees to mimic realistic wind conditions.

It turns out that the extra lights increase the aerodynamic drag by more than 6 %, which corresponds to an increase in fuel consumption of 1 L/100 km for long-haul trucks. With a typical yearly driving distance of 150 000 km, this means that the truck consumes as much as 1500 litres extra each year only because of the extra lights!

The real cost for mounting extra lights therefore greatly exceeds their purchase price over the course of the truck’s life span. Each year, they may cost as much as €2.000  in increased fuel costs (about as much as the purchase price). The CO2-emissions increase by more than four tonnes each year – more than double the emissions of an average car.

Of course, some trucks really do need to add extra lights. But it would certainly be good if one at least contemplates whether the benefit from them is worth the significant extra cost that they incur. Alternatively, one should try to mount the lights in other positions of the truck that are not as aerodynamically sensitive as the normal position.

It is a lot worse with aerodynamic nightmares such as the Michelin Man figures or large “billboards” that are often found mounted on trucks, and whose practical benefit could be questioned. Would it be considered reasonable to drive around with these if their true cost through increased fuel consumption was fully known?

Instead of wasting money on add-ons that could cost 2 000 Euros per year, the alternative could be to buy the automatic roof deflector Ecosense Trailer Assist which instead could save as much money and CO2-emissions each year. The system makes sure that the truck’s roof air deflector is always optimally positioned after each trailer or load carrier change. It is an investment that pays for itself quickly and then delivers pure profit from the achieved fuel savings. Great both for the hauler and for the environment!

We use cookies on our website to give you the most relevant experience by remembering your preferences and repeat visits. By clicking “Accept All”, you consent to the use of ALL the cookies. However, you may visit "Cookie Settings" to provide a controlled consent.
Cookie SettingsAccept All
Manage consent

This website uses cookies to improve your experience while you navigate through the website. Out of these, the cookies that are categorized as necessary are stored on your browser as they are essential for the working of basic functionalities of the website. We also use third-party cookies that help us analyze and understand how you use this website. These cookies will be stored in your browser only with your consent. You also have the option to opt-out of these cookies. But opting out of some of these cookies may affect your browsing experience.
Necessary Always Enabled
Necessary cookies are absolutely essential for the website to function properly. These cookies ensure basic functionalities and security features of the website, anonymously.
Functional
Functional cookies help to perform certain functionalities like sharing the content of the website on social media platforms, collect feedbacks, and other third-party features.
Performance
Performance cookies are used to understand and analyze the key performance indexes of the website which helps in delivering a better user experience for the visitors.
Analytics
Analytical cookies are used to understand how visitors interact with the website. These cookies help provide information on metrics the number of visitors, bounce rate, traffic source, etc.
Advertisement
Advertisement cookies are used to provide visitors with relevant ads and marketing campaigns. These cookies track visitors across websites and collect information to provide customized ads.
Others
Other uncategorized cookies are those that are being analyzed and have not been classified into a category as yet.
SAVE & ACCEPT